Pierre de Lasenic (Petr Pavel Kohout 17.05.1900 – 23.06.1944), who unfortunately died far too early, was certainly one of the most outstanding hermetic and esoteric practitioners in the former Czechoslovakia.

There are some notable reports of his magical and hermetic abilities.

Nevertheless, Lasenic has remained completely unknown in the German-speaking world.

Finally – a manuscript attributed to him – has now been published into English. It is to be hoped that this book will also be translated into German.

Its contents are just as special as the presentation and production of the book itself!

What distinguishes the great Czech authors of esotericism (Pierre de Lasenic, František Bardon, František Kabelák) is that they show you a WAY of self-initiation – from your own practice for the practice of others – and make this WAY practicable.

In this book, Pierre de Lasenic was not only concerned with initiating this WAY – as was usually customary in his life time – in the form of religious or lodge associations (because all degrees of initiation are awarded exclusively by “God”), but also to show him for everyone who is ready for it.

With the publication of this book, this knowledge is now being made available to a larger readership for the first time, because this text was protected by the spell of a grandmaster of the Martinists (Jean-Baptiste Willermoz) for a long time before publication and was previously in the form of this manuscript, only accessible to very few people.

This manuscript was written in former Czechoslovakia in difficult times of war.

If this war is fortunately also history today, it still takes place in every human being again and again, because as Franz Bardon already wrote:

“Unfortunately, if there is anything really occult, it is most often the truth. That may sound paradoxical, but the key to liberation is the truth. Because mental purity and mental impurity is something with which man has waged a tireless and therefore involuntary struggle with himself from time immemorial.”

It is not so easy to free yourself from the inner (and outer) bonds and obstacles in order to become a “Martinist of the heart” to walk the WAY to “God”. This requires high ideals, great personal ethics and integrity. But every WAY begins with the first step and every guide often starts with a good book or text, like this one.

It is gratifying to see that the younger esoteric generation in the Czech Republic is again picking up on their hermetic roots and has also taken on the often tedious translation and editing work as well as the artful production of such books.

We would like to thank the translators: Astrid Haszprunarová & Matthew Blankenburg, as well as the editor, practitioner and keeper of Czech hermeticism: Lukáš Loužecký.

You can find a lot of information about important Czech hermeticians as well as new activities and book publications in the Czech Republic here: http://czechhermetics.com/

You can find an interview with Astrid and Matthew about their WAY and their work on Rudolf Berger’s remarkable website: https://www.thothermes.com in the podcast episode: Season3-Episode12 -Czech Hermetics

The Czech initiation line of the Martinists is also dealt with in the appendix of the book.

Interestingly, (probably because he was not a Czech), the remarkable esoteric writer Gustav Meyrink | Gustav Meyer, who also lived in Prague at the time and there in 1892 – through a diploma handwritten by Papus (with the signature of Baron Adolf František Leonhardi), in the highest degree of Martinists = S.I. was inaugurated, is not mentioned.

Gustav Meyrink was only 24 when he received the diploma, which is indicative of his particular suitability in relation to this initiation.

S.I. means “Superior Inconnu” = unknown superior, which is the highest degree of Martinists. However, this degree cannot be communicated, since the initiation is linked to an examination, the outcome of which depends on the degree. The initiation to this degree does not automatically end with the award of this degree!

A.L.G.D.G.A.D.L.U. = A la Gloire du Grand Architect de l´Universe = To the glory of the great master builder of the universe.

In the middle in between the Hebrew letters for Jehoshwa.

Acting according to the powers that are regularly granted to him by his initiator S.I. were transferred.

Declares that on December 22, 1892, he received the degree of S.I. transferred

to the brother Gustav Meyer.

and requests all S.I. and all members of the fraternities associated with our venerable order to receive this brother when he is identified by the common signs.

So that not only Pierre de Lasenic, but also Gustav Meyrink (who can offer a lot to every beginner and advanced esotericist) is not forgotten, the well-known and incredibly hardworking Czech writer, translator, alchemist and publisher Vladislav Zadrobílek (psyeudonym: D. Ž . Bor) also published 2 books (for which I was able to contribute some unknown documents) about Gustav Meyrink. (Trigon Verlag)

As is usual with most seriously growing occultists, materials and documents arrive at their house as soon as they turn to a topic or a special research area. When I visited Vladislav, he also showed me, among other things, the death mask (it makes a very special impression if you hold it in your hands) by Gustav Meyrink, which he had also recently received, and which is now in the world-famous hermetic library » Bibliotheca Philosophica Hermetica”, see also:“ The Embassy of the Free Mind in Amsterdam.”

During my visits, I got to know Vladislav as a particularly funny and versatile person who did a great deal for the distribution, translation and publication of known and unknown esoteric books and texts (from all possible languages) in Czech and Czech !

In 2018 Emil Stejnar also brought Gustav Meyrink back into the public eye in his inaugural novel “At the Portal to the final latern“. Gustav Meyrink, it was particularly about “being awake” and “awakening”, which was an important topic of his last works and is also a central topic in Emil Stejnar’s 12 books today. 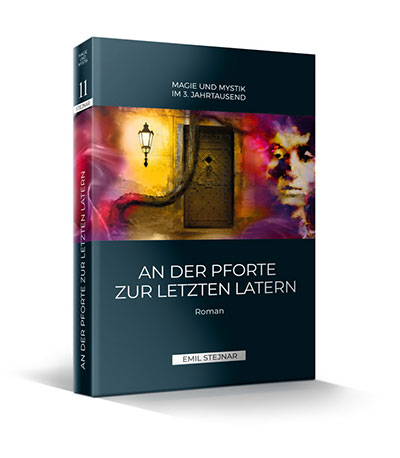 “In this exciting thriller, the“ awakening ”is illuminated from different points of view. The suggestive visual language, interwoven with known and unknown quotes by Gustav Meyrink, draws the reader ever deeper into the world of the protagonist, in which dream and reality can no longer be distinguished. This Kafkaesque confusion, and the instructions given, cause awakening, which, like an initiation, leads to new self-knowledge.”

Last but not least, a completely unknown manuscript about Gustav Meyrink will appear in the near future, which has been missing for decades, luckily has now reappeared, and which I was allowed to transcribe.

What will 2021 bring? A lot is changing and happening in the world right now and many people are really curious to END_OF_DOCUMENT_TOKEN_TO_BE_REPLACED